How Do Generators Work?

If you’re wondering how generators work, you’re not alone. They’re often essential, but they seem pretty complicated. At their most basic level, a generator is a machine that converts mechanical energy into electricity. 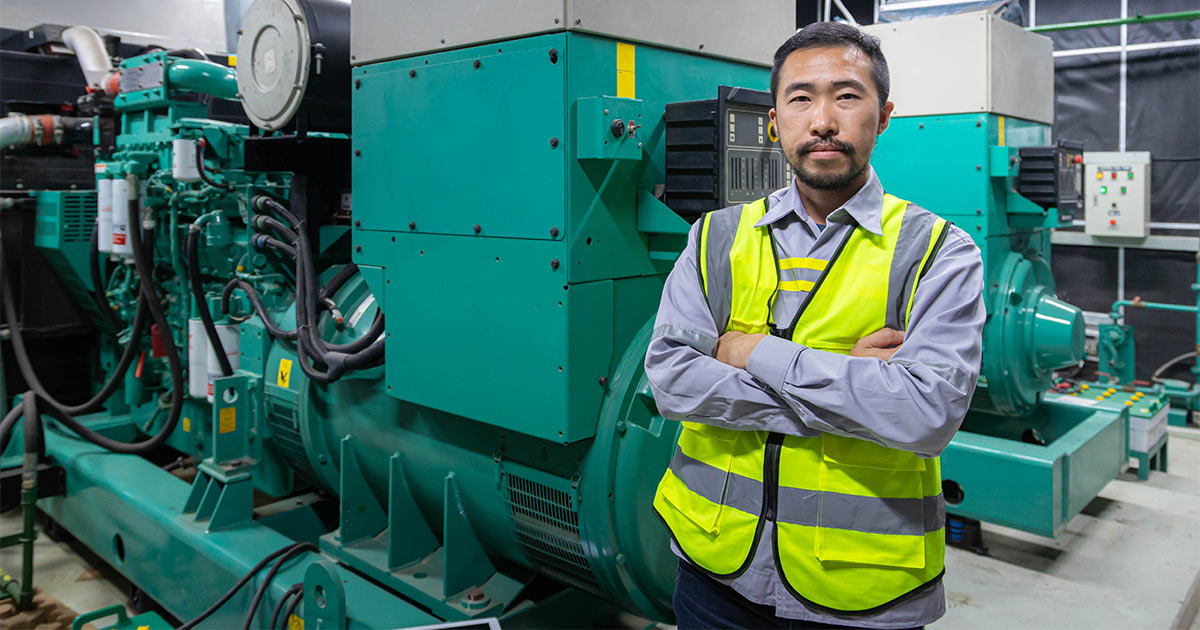 Some generators are enormous industrial machines, and others are residential size. But at their heart, they all work around the relatively simple concept of creating electricity from a mechanical force. It might seem like magic, but there is quite a bit of engineering and science behind their design and the concepts that make them work.

With forty years under my belt as an engineer, I understand generators quite well, and I want to pass my knowledge on to you to help take the mystery out of how generators work. So let’s look at generators a bit deeper.

How Generators Work to Create Electricity

There are a few types of generators, but they all rely on mechanical force to generate power.

The gas-powered generator is the most common application you’re likely to see in a residential setting. In this type of system, an internal combustion engine provides energy that turns a shaft. On the shaft, there is an electromagnet. This part of the design is called an armature. The armature spins along with the shaft.

Nearby, there is a piece of equipment called a stator, which maintains a magnetic field around the armature. The spinning armature creates electromagnetic induction as it interacts with the field around it.

This concept was first discovered in 1831 by Michael Faraday. It is now the backbone of off-the-grid energy generation using combustion engines. Here is a quick demonstration of what Faraday discovered, as well as the mathematics proving the concept.

Copper wiring conducts the electricity generated by the induction process, and you can harvest that energy. Smaller, portable home generators have one or a few electric plugs for household items.

Portable generators can also be used on remote job sites to power tools and other equipment.

Larger units are sometimes called fixed or standby generators. These big machines aren’t portable and are hardwired into your home. This type of unit is capable of running uninterrupted for days at a time, or even longer when necessary. They are often powered by propane or LNG, with the fuel stored in large tanks nearby.

Can I Install My Own Generator?

Standby generators are typically connected to a transfer switch that automatically detects a power outage and activates the generator. The switch transfers your power supply from the commercial grid to your own generator’s power seamlessly and then switches back when it detects incoming voltage from the street service.

However, installing a transfer switch is a job for a professional electrician. There is a risk of electric shock if the system is installed improperly. For instance, if your generator is running and the switch isn’t installed right, it may leak voltage back to the electric grid. That could injure the workers trying to repair the lines.

You can install a transfer switch for use with a portable generator too. Or, you can use extension cords to power the devices you need during an outage, like your refrigerator, freezer, and lighting. You should never attempt to ‘back feed’ your home’s electrical panel by plugging the generator into the fuse panel or a dryer outlet. This is an extremely dangerous practice.

Are There Other Types of Generators?

There are other kinds of generators that also generate electricity. That’s because generators aren’t just for energizing homes when the commercial power grid fails. Huge generators lie at the heart of the commercial and industrial power grid, in the machine rooms of ocean liners, and even on space ships where the decay of nuclear isotopes charges batteries.

There are types that use wind power, gravity, pressurized steam, the sun, coal, nuclear power, and hydroelectric energy to create the mechanical force needed to generate electricity.

The Basic Parts of a Generator

Almost all generators have a few basic parts in common.

Portable gas generators are almost all just about the same when broken down part by part.

Some industrial applications replace specific parts of the system, but the principles remain the same. For instance, a wind-driven generator doesn’t have a fuel tank or a fuel pump. Instead, it has massive fan blades that are turned by the wind. In essence, wind acts as fuel in the place of gasoline.

The basic parts on most generators consist of the following:

Some industrial applications add in heavy-duty radiator systems, cooling fans, and other ancillary equipment that helps the unit run for longer periods than are typical in residential settings.

Breaking Down the Basics: The Individual Parts

The engine of the generator is what drives the shaft. It provides mechanical power that in turn creates electricity. Some portable residential models have relatively small engines, while permanently installed residential or commercial generators have car-sized motors.

Generators often run on gasoline. That’s because gasoline is a common, easily available, and portable fuel. Those engines have fuel tanks built into the device, and similar fuel pumps, filters, injectors, and a spark plug. Larger generators often run on propane or liquid natural gas (LNG).

The exhaust system on a generator helps vent the byproducts of the combustion process that powers the unit. Combustion is also usually toxic and a bit dirty, so the exhaust fumes must be directed away from people and structures nearby. Even with the best exhaust system, you can’t run a generator inside. It is exceedingly dangerous as it creates carbon monoxide gas, which can be lethal.

When an engine runs, it creates heat. So the exhaust system also serves as a way to shunt the developing heat away from the generator itself. Some units feature a dedicated cooling system with a radiator and auxiliary fans, just like you might find on a car.

The alternator includes the armature and the stationary parts that work together to create the electromagnetic field that generates electricity.

The lubrication system ensures that the moving parts of the generator don’t bind up or overheat. Typically, the lubricant is a petroleum product, just like motor oil you’d find in a car. It’s essential that the oil is changed regularly, even if the generator doesn’t run that often. If a generator works hard, the oil should be changed more often.

Generators should have their oil changed according to the manufacturer’s specifications, but doing so after every 24 hours of run time and at least once annually is a good rule of thumb for keeping your unit in top condition.

Accordingly, generators have a charger that provides a steady dose of electricity that ensures the battery is charged. Sometimes, the charger is called a tender or trickle charger.

The actual frame of the generator is the body or assembly. The terms are usually interchangeable. Large stationary generators might also have protective housing. Smaller generators may be on wheels, so they can be rolled to a convenient area during operation and then stowed away until the next time it’s needed.

The control panel on a typical midrange generator is where the user can program its functions, check its total hours of operation, and run diagnostics. On less expensive models, there might just be a switch for turning on the battery or gas supply and a pull cord to manually crank the unit.

Big industrial models and expensive residential units often have Wi-Fi or cellular connectivity, so the generator can be monitored constantly and remotely.

Generators can be either primary or backup sources for electrical power. The bigger their engine, the more power they can generate. So, there is a huge variety of machines that depends on the nature and scale of the task they are designed for.

Typical homeowners will be looking at propane, LNG, or gasoline-fueled generators as backup energy sources in the case of disruptions in the commercial power grid.

With storms seemingly becoming stronger and more common each year, it’s probably prudent to consider purchasing a backup generator for your home.

Now that you understand how generators work, you’re armed with all the facts to make the right decisions.

“With over 40 years experience as an engineer, I use generators on a daily basis. I consider myself highly qualified to pass on my knowledge”

Updated On: July 12, 2022
TABLE OF CONTENTS
How Do Generators Work?
How Generators Work to Create Electricity
Can I Install My Own Generator?
Are There Other Types of Generators?
The Basic Parts of a Generator
Breaking Down the Basics: The Individual Parts
Engine
Fuel System
Exhaust System
Cooling System
Alternator
Lubrication
Battery Tender or Charger
Body or Assembly
Control Panel and Monitor
Bottom Line: How Generators Operate
Close
Your custom text © Copyright 2022. All rights reserved.